What a fun night last night!  I think that was our best showing ever, I’m so glad all but 3 people could join us, and that we had some friends, spouses and supporters there, as well.  All in all, there were 22 dog students, along with Quattro, who made a cameo appearance.  What a spread of food!  I love how it all comes together, there is a great variety without any prior planning, and everything was delicious!  I didn’t get to mingle as much as I’d like to have… maybe for our spring send off social, I’ll have a rotating crew of people manning the hides and stopwatch, so I get more time to socialize 🙂

When I look back at 2015, it amazes me how long the list of accomplishments is, and the multiple accomplishments some dog/handler teams attained.  Even if it was “just an ORT”, it’s still a pressured event (timed! blind! official!) or the achievement of not just one, not just 2,  but 3!! NW3 titles in one year, everyones dedication, practice and perseverance is admirable.  And that does not include the intangible successes, the shy dogs who have come a LONG way, the handlers who were ready to give up trialing based on one (or a series) of misses, who decided to give it another go, the handlers who said “a year ago, I wouldn’t have titled like I did today; we’ve learned SO much in a year”, the friendships across several states, the tries / attempts at a title, only to miss it by a fraction of an inch, or fraction of a second, or a slip of the tongue (“I didn’t mean Alert – can I take that back?!”) who during that same trial placed in an Element or earned a Pronounced for their handling at another element – all those are important “wins”, too.  For those brave enough to enter, drive a long distance, stay in a hotel, sit in a parking lot all day, and put their training to the test, when everyone who’s watching knows where the hide is, I congratulate you.  Not many pet dog owners experience the bond that you have with your dogs; not many dogs get to experience new places, faces, smells and the special treats like your dogs do.  Even if the scorebook does not read Title Achieved on the day you went to play, you and your dogs shared something not many other dogs and owners do.  And when it does go well, the feeling is indescribable – fun, smooth, easy – and a sense of connection that’s hard to compare.

So – back to last night.

A little about last nights searches.  For Holly’s students, the Intro to Odor and Intro to Nose Work folks, I wanted to keep it simple in an otherwise busy, loud, distracting environment.  The more focus on hunting we could give them right off the bat, the more engaged in searching (not socializing or scanning or freezing up) they would be.  So, they had 5 hides as they walked into the search area, all close together, all in little metal buckets.  My bad, it didn’t occur to me that the buckets were only 3-4 inches in diameter, so the dogs could get their snouts in, but couldn’t open their jaws to eat their treats!  It was some good problem solving for them, but I had really wanted to make it easier than that.  I ended up turning half the buckets upside down, so they could eat the treat right off the top of the bucket, to keep them motivated to work harder.  And it did work for the most part – once they got some success (ate some treats) they worked harder at getting into the buckets.  A few dogs ventured off to another search section, but soon came back to the section with food.  Multiple hides, multiple successes, in a small area in a short time, will help build focus on hunting.  Yeah for Larkin for walking in the building, and finding all but one hide!  The other thing I didn’t factor in was the noise the buckets made, when knocked, knocked over, or bumped with a tag. That caused some dogs to pause – and hopefully gave the handlers something to think about.  How can you set up hides where the dogs have to work through a little noise or movement, not so much that they get scared or give up, but just enough that they persevere despite it.  I think they all did a great job, they’ve never had an audience that big for sure, and the food smells in there must have been distracting, yet we really didn’t have any run aways 🙂  And for the new handlers, that was your first taste of doing NW with a big audience made up largely of strangers.  That in itself can be daunting, yet everyone handled it well.  Let their dogs work, called them back when they were straying, and basically provided great chauffeur service for the evening!

For the rest of the students, I really wanted to honor the years achievements, and do a year in review.  Each search grouping represented a month: Jan, Feb & Mar had snow-related items, the buckets w/ the snowflake and sweater patterns, the bag w/ mittens on it, the snow melt. April showers (the umbrella) & Easter eggs bring May flowers.  June is berry season (yes, I eat a lot of berries in the summer, hence all the green berry cartons!) and more flowers, July is more berries and a picnic basket.  August is bug spray and the last of the flowers, September is tomato boxes. October is halloween cups and trick or treat containers, November is a pumpkin.  December is poinsettias, stockings, Christmas trees, gift bags and boxes.  Along with each month, was a list of who achieved what, and sometimes a photo.

There were 18 hides out there (I think I had said there were 12 initially) 6 hides of each odor.  The birch was concentrated at the start, everything else was evenly distributed.  The dogs had 2:30 to find what they could find.  I love doing this blind to the handlers – yes, there were some hides you could see when your dog got close, but not knowing where everything is and then seeing what dogs found what hides is part of the fun and makes it interesting.  6-8 finds seemed about average for the majority of the dogs, but as the dogs went up in level of achievement and time training, the number of hides found went up, too.  I think our high scorers were Oasis, who has her NW2:  she found 14!! hides.  Next I think was Midnight, her sister, who has her NW1, she I believe found 12.  Logan would have found more, but he cased the place for the first :33 seconds, before going back and alerting on his finds.  I think he was in the 10-12 found category.  Catcher, Calvin, Rita, Billie Sue, Ella – all were super excited to be in and out of the car – woo hoo! – and had as much fun running from hide to hide as they did finding the hides.  BoomBoom and Koda were much more efficient, making their way methodically around the room, picking up Alerts as they went.  Tyrah had to investigate the new stuff in “her” place, before going back and alerting on hides.  Panda did a great job of finding the hide in the flowers – she was pretty far down the run order, and I had forgotten that hide was there, until I saw her response to odor at it.  She then did a great job in working out the high hide, that was virtually right above it.  All the dogs survived the pumpkin head fiasco – another hide placement I didn’t think through – with hopefully no PTSD over jack o’lanterns.  Phil & Cecil had personal bests – they did a much better job this social than they have in the past, where the distractions of people and new objects threw them off their game. Last night, they came out and worked!  For these dogs, I wanted to let them “double dip”, that is, go back to a previously found hide and get rewarded again.  This is to build confidence – odor pays! – and help keep them on track.  Gidget and Reo did a nice job of moving through the search area – this was probably the most odor exposure they’ve ever had!  Especially with all 3 odors out.  I know we’ve done some multiple hide searches before, but not like this.  They clearly had a look about them, like, “there is SO… MUCH… ODOR!” It was fun to see them realize they could pick a tendril of scent out of the cloud and follow it back to source, over and over.  And special kudos to Roxie, our first NW3-Elite team, who found the one hide no one else did – in the poinsettia!  Oh, and then there’s Quattro.  His first time in the Gym since he was a baby puppy last spring, he had been sitting quietly in the car since about 4p.  He did not want to stop for a pee break, but pulled me in.  I was really impressed with how focused he was, and how he was able to leave a previously found hide to move on to find another.  That has been a challenge for us, getting him to leave one or 2 hides to search for more.  He many times ping pongs between 2 hides.  So I was very happy with his work!  I could say the same of several others – Logan, Catcher, Calvin, Reo, Panda – all have struggled with moving on in the past – but all did a great job of continuing to work.

It was really fun to watch the dogs come charging in and having a blast, accumulating hides (and rewards!) and knowing the progress they’ve made over the year.  From Catcher leaving the “toys” to keep working, to Phil’s nice alerts, to Cecil making at least 4 finds, to watching the Brittanys fly around the room, and who doesn’t love Ella’s happy dance after a find?  She completely elevated, all four off the floor, on one spin.  Hard to believe we are on break until Martin Luther King day (Monday and Tuesday that week will be when we restart)  I keep waiting to see some East Coast trials posted, but none yet.  I will certainly let folks know when they pop up!  I’m looking forward to NW1 again, and hoping to trial and hang in the parking lot with some NW1 students.  In the meantime, we will continue practicing: building drive, fine tuning the final responses, working corners, objects, distractions, high hides, low hides and everything in between!

Thank you for another fun and successful year in the books, and a great Sniffin’ Social.  I am honored by your commitment to your dogs, the sport, and to my classes, and for always being open to trying new things.  I also love the support that everyone has given one another, whether at the Social, at trials, ORTs and in classes.  I have made a lot of friends through this sport, and it’s been fun to see my students do the same.

Merry Christmas and Happy, Safe Holidays to everyone! 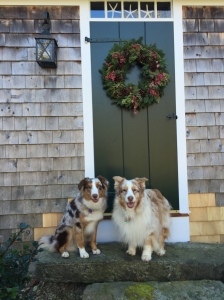